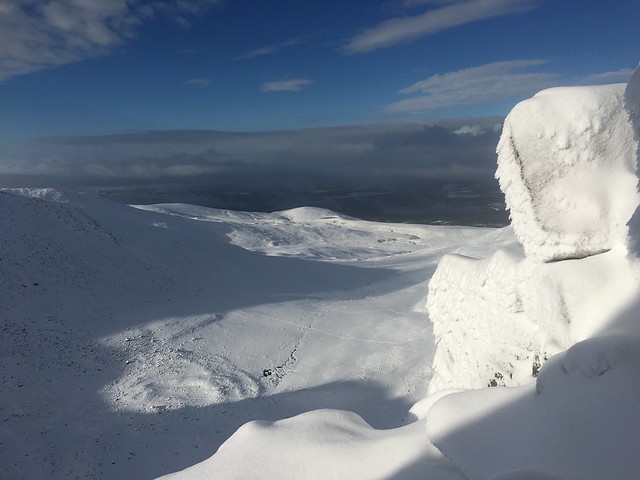 I’ve just come back from a cracking week climbing in Lochaber and the Cairngorms with a friend and with awesome guiding from John Orr. Conditions were mixed but more settled towards the end of the week.

On Monday there was reasonable snow cover from the top of the gondola (655m). We traversed around to the bottom of the Quad Chair and dropped off into the West Face Gullies. Here we scrambled up and down a bit and revised crampon, axe and rope skills. It was a short day but well worth it, I hadn’t put crampons on since Nepal in March last year!

Tuesday we took on “The North Face of the Ben” haha. We were aiming for Green Gully but it was a busy day at the CIC, so we diverted to Thomo’s Route, the original plan was to do a single pitch, come down and try something else but we got carried away. It’s a good route sucking you through a shoulder width gully with a few difficult moves. The top pitches were pretty straight forward.

We the ran off for an overnight stop at Aviemore. Wednesday we walked round into Coire t-Sneachda and chose Fingers Ridge, this was a pretty straight forward climb.

We then supped at La Taverna in Aviemore and hit up their all-you-can-eat buffet, which was awesome. Just the food you need after a day on the hill.

Originally on Thursday we wanted to walk round into Coire an Lochain but had to head back to Glencoe, so would have run out of time. So we stoppped off at Coire an t-Sneachda again and climbed Hidden Chimney Direct. This had a challenging first pitch as the snow was fairly useless and powdery and hid all the good tool placements. After the first pitch it was easy going though and quite pleasant.

Friday we had to bail early for a flight from Glasgow, so we just went to the road side crag under Ballachulish Bridge and did some drytooling training. I had never done pure drytooling before, so it was quite interesting. We then bailed to Glasgow and after being delayed and forced to wait outside due to a “fire alarm”, I then got stopped at security for trying to smuggle a miniature bottle of wine into departures. What a waste! 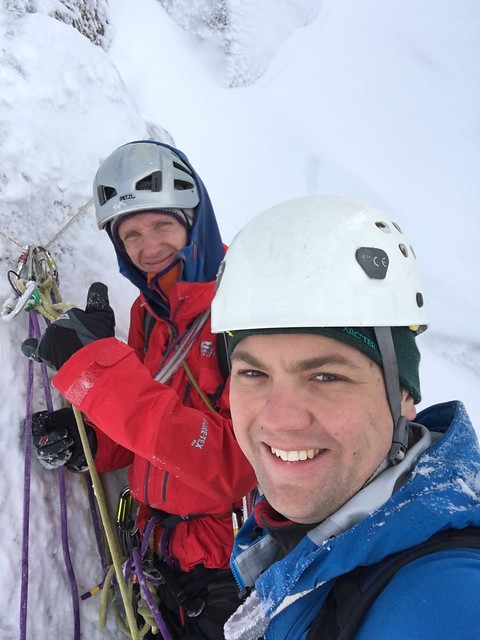